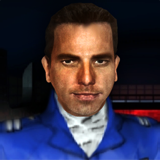 Upon graduation from the Academy in 2663, Bradshaw requested a front-line assignment on the TCS Concordia in the Enigma sector. The Navy sent him to the TCS Defiance instead: an old Ranger-class carrier in the Surtur system, Gemini.

On the Defiance, Bradshaw continued flying with his Academy-classmates Fabian Schroeder and Jason Beverly. Eventually, he also became romantically involved with one of the other Defiance pilots, Marie LeBlanc. The affair lasted almost a year, but ultimately ended badly. In the eight months that preceded the Defiance's destruction, Bradshaw filed no less than four separate transfer requests, all of them denied.

In early 2666, the Defiance was destroyed during Operation Nightshade, a Confed strike on the Trk'Pahn sector. Bradshaw rallied the remaining pilots, and under his command they managed to complete their assigned mission and land on the TCS Valiant without any further losses.

The subsequent investigation not only cleared Bradshaw and the other Defiance pilots of any wrongdoing in the loss of their carrier, but also concluded that Bradshaw's quick thinking and able leadership may in fact have saved the Valiant and turned the operation from a complete disaster into a partial success.

Bradshaw and Schroeder spent the next few months in the Valiant's Rapier II squadron. When the Valiant was mothballed following the truce agreement, Bradshaw, having won Admiral Terrell's favour after Operation Nightshade, was assigned the Wing Commander position onboard the TCS Lionheart. 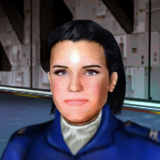 Sparrow graduated from the Acadamy in 2661, best in her class, and with an arrogance to match. Her first years of front-line service onboard the TCS Defiance were extremely stormy. It wasn't until her career almost ended over an insubordination incident in 2662 that her superior officers begun seeing any sort of improvement.

This improvement, however, was rapid. By mid-2663, she was finally promoted to 1st Lieutenant, and her superiors had enough confidence in her to start giving her high-profile strike assignments.

In late 2665, a year-long affair between her and William Bradshaw ended. Nobody, except for Sparrow and Bradshaw themselves, really knows what exactly went wrong - most pilots, however, were willing to bet it was all her fault. This, of course, did nothing to improve her relations with the rest of the wing. She resented the other pilots' attitude, and simply stopped bothering trying to get along with them anymore. However, her performance remained excellent, and she was promoted to Captain just days before Operation Nightshade.

Following the loss of the Defiance, Sparrow was assigned to the TCS Guadalcanal as the commander of its squadron of Sabres. Her performance on the Guadalcanal thus far has been very impressive. The ship's Wing Commander, however, has expressed concern that she's been using her position to turn the squadron into a personal fan club of sorts. 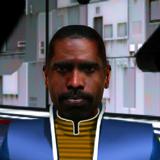 Cougar started out his Confed career as an enlisted man, eventually obtaining an officer's commission through the ROTC programme. Because of this, he is a few years older than most pilots of his rank, and in most of his ship assignments so far, he found himself commanded by officers younger than him. As an ROTC man, he has also on several occasions encountered some degree of discrimination from Academy graduates. He was rather relieved when, after having been assigned to the Lionheart as Bradshaw's executive officer, he found that his new Wing Commander had great appreciation for his experience and stability.

As a pilot, Cougar is good, even if not remarkably so. Still, he has a reputation for reliability and obedience - Cougar has never lost a wingman. Considering this, Bradshaw was rather surprised when Cougar actually requested to fly with the much less reliable Spoons. Apparently, however, Cougar treats Spoons as a personal challenge of sorts, and seems (understandably) proud of the fact that even Spoons hasn't ever had to eject while on his wing. 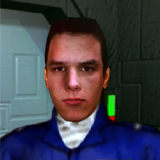 A fifth-generation colonial, Spoons was born in a small farming settlement in the Oxford system. He excelled at school, and continued to do well at the Academy - at least in the theoretical classes. As a pilot, however, he is generally regarded as an unreliable thrill-seeker. By the time he graduated, the only people still willing to fly with him were his room-mates, William Bradshaw and Jason Beverly.

Given the size of the Lionheart's wing, other pilots have had no choice but to get used to flying with him, and much to their suprise, he hasn't gotten anybody killed yet. Indeed, Cougar and Viper have on occasion actually requested to fly with him.

Spoons' superiors remain in two minds about him. Some continue to hope that he will get tired of flying and request a transfer to the Navy, where his high intelligence might be more useful. The rest fears that he won't live long enough for that. 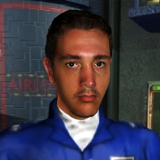 Squealer attended the Academy at the same time as Spoons and Bradshaw, quickly becoming friends with both. He proved to be a fine pilot, and many have speculated that he would have gotten a prestigious assignment to the TCS Concordia or the Wolfhound straight out of the Academy, if it hadn't been for one small detail - due to the number of demerits he had managed to accumulate, Squealer was only barely able to graduate at all. Thus, he was relieved to get assigned to the Defiance together with Bradshaw.

Once on the frontlines, Squealer's insubordination was quickly forgiven by his superiors in consideration of his otherwise excellent perfomance. He quickly racked up an impressive collection of medals, but - unsurprisingly - not even one promotion.

Following the destruction of the Defiance, Squealer found himself serving on the TCS Guadalcanal together with Sparrow. Ironically, he finally earned his promotion to 1st Lieutenant just three weeks before being informed that he would be dismissed, as one of the first victims of the truce. 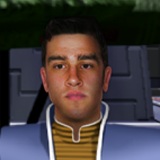 Saxman graduated from the Academy in 2666, a year after Bradshaw. A specialised bomber pilot, he was assigned to the TCS Defiance's Gladius squadron.

While serving on the Defiance, Saxman frequently flew sorties with Bradshaw, whose Rapier wing provided escorts for the Gladii. Over time, they have grown to be good friends, especially after Saxman turned the tables on his escorts, knocking a Dralthi off Bradshaw's tail during Operation Nightshade. Following the loss of the Defiance, Saxman was given a different assignment than Bradshaw, flying patrol missions from Perry Naval Base. The two, however, have kept in touch.

After several fairly fruitless months at Perry, Saxman's career now seems to at last be getting back on track - he has been assigned as one of the senior bomber pilots to the TCS Firekka. 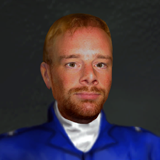 Hailing originally from the North American state of Quebec, Popsicle has the distinction of being one of just three Earth-born pilots currently assigned to the Gemini Sector. He is also the only one to have found himself in Gemini by receiving exactly the assignment he had asked for at graduation.

Where most pilots clamoured for assignments on the Concordia and other frontline carriers, Popsicle decided to take a gamble - he chose, instead, to request an assignment on the freshly-launched TCS Firekka, an escort carrier in Gemini. Doing so, he figured, he would actually end up seeing more action than on the Concordia.

He was right. A month after his arrival, the Firekka took part in a major raid behind enemy lines, where Popsicle earned himself a promotion and a Bronze Star. Nonetheless, however lucky he may have been, Popsicle remains a young and relatively inexperienced pilot, having spent little more than a year in action. 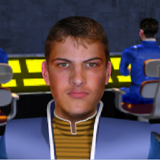 Once a promising young officer in the Confed Space Forces, Trigger ended his career rather abruptly by punching out his commanding officer during a mission debriefing. The Space Force might have been willing to overlook the incident had it occured after a particularly stressful mission - unfortunately for him, however, Trigger's wing did not encounter any enemy activity that day, and Trigger himself never provided any satisfactory explanation for his actions.

Since his discharge, Trigger has been drifting around from system to system. He currently works in the Nexus system, flying a Talon for the local Militia forces.

According to his wingmen, Trigger is a good pilot. He usually obeys orders, has never been known to panic in combat, and can generally be relied upon to do his job right. As a person, however, he remains an enigma. 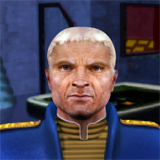 Reismann is one of the fastest-rising stars in the Gemini Sector. During his brief, barely ten year career, Reismann has distinguished himself as a highly skilled and tenacious destroyer captain, always willing to push himself - and his subordinates - as far as necessary to get the job done.

While there can be no doubts about his skills, many have reservations about his personality. He is known as a cold and demanding commander. Indeed, although casualties on his ship are well below average, the crew turn-over rate is three times the norm - on average, half of his crew requests a transfer at the end of their first month. At the same time however, it has been noted that those of his crew who have stayed with him beyond that first month invariably end up becoming some of the best-trained and most highly-motivated personnel in the sector. On several occasions, Reismann's ship, the TCS Roland, has been able to escape seemingly impossible situations only through the skills of its commander and his crew.

Following the armistice, Reismann's destroyer was among the first to be mothballed. However, this did not end to his career. Quite the contrary, Reismann was promoted to Commodore and given command of the escort carrier TCS Firekka. It is most certainly not a coincidence that Admiral Terrell has put this young, but highly skilled officer in charge of the only carrier in Gemini not slated for mothballing while many more senior officers were given early retirement. 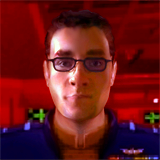 Born on a backwater mining station in the Beta Tauri system, Freyers came very close to dying of boredom. Unsurprisingly, he signed up with Confed on the same day he became eligible. During his officer training, it was discovered that Freyers had a great deal of aptitude with coding systems.

Upon graduation, Freyers was assigned to the TCS Winterrowd in the Gemini sector. His wishes for an exciting career were fulfilled exactly three days later. Freyers decoded a Kilrathi transmission, and as a consequence, the Winterrowd was able to successfully hold off a Kilrathi attack that otherwise would have reached the Perry system before Confed could react. His success got him a promotion, a medal, and a meeting with Admiral Terrell. It also gave him quite an ego.

When the truce was signed, the Winterrowd was mothballed and most of its crew dismissed. However, to ensure that Freyers' talents would not be wasted, Terrell transferred him immediately to the TCS Lionheart. 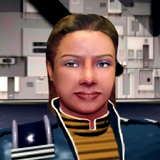 Henderson comes from a family with a long and distinguished military history - her father and grandfather had both been Space Force pilots, as are both her brothers. Indeed, her decision to join the Navy instead of the Space Force was something of a disappointment for her father, especially when she chose to enlist rather than seek a place at the Navy Academy.

A dedicated, hardworking young woman, Henderson has risen through the ranks at a relatively fast pace, winding up as the leading Air Wing maintenance officer on the TCS Lionheart.

Perhaps because she has so many pilots in her family, Henderson, unlike most maintenance officers, considers pilots to actually be more important than the fighters she is responsible for.